On the day of shravana krishna 6 sanvat 2024 (Date: July 7, 1967), a promising child was born in a well-to-do, service-minded and religious family of Shri Nirmal Kumar Ji Jain, in Malathon village of Sagar district, Madhya Pradesh. The child was named Mukesh Kumar. His mother's  name was Shrimati Munni Bai Jain. He had 2 younger brothers, Rajesh Kumar and Vikas Kumar and 2 sisters, Rajni Kumari and Sarita Kumari. Since childhood, Mukesh Kumar had been of a disenchanted nature. His grandmother used to say that when Mukesh was in the womb, his mother used to have dreams of devotion. Someone has rightly said that "A child's nature can be noticed in the cradle itself" and this saying goes perfectly well in the case of Acharya Sri. He did schooling till the age of 14 years. At the time of elementary education, sometimes he used to keep his bag at school and went away to meditate in the forest.

Once in their village, the revered Muni Shri 108 Nirvana Sagar Ji Maharaj visited for the first time. Impressed by Muni Shri, Mukesh Kumar decided to walk with him. On March 7, 1943, he left for a trip to the Atishay Kshetra(miracle zone) with Muni Shri. He told his family and villagers that he will just accompany Maharaj ji till the next village and come back. But when he did not return for almost a month and half, his grandfather Sukhlal ji went searching for him and met him at Sagar. Sukhlal ji insisted upon his coming back, but Mukesh Kumar refused. When he started crying, Mukesh Kumar felt pity and agreed to come home with approval from Maharaj Ji. After washing his hands and feet he entered the house, slept in the temple itself at night and reached Sagar in the very evening of the next day.

Muni Shri reached Thuwon from Sagar and did Chaturmas there. After being unwell in Chaturmas, he stayed home during Dashlakshana. After that, he arrived at Teen Murti with 9 Shullakas(disciples) and from there returned to Malathon with Kalyan Mati Mata ji to have his next Pratima(statue). He then reached Hastinapur with Mata ji and took seven Pratimas with Muni Sambhav Sagar ji. Then he received the initiation on 5/5/1965 in the district of Agra, Uttar Pradesh. Afterwards he came to Jaipur and met Shri 108 Rayan Sagar ji Muni Raj. After doing meditation he took the Muni initiation on 30/04/1985 during Chaturmas. After completing Chaturmas with Maharaj ji, he reached Mojmabad with him and parted ways with his Guru(teacher) and visited Madhorajpura for the first  time and established another Chaturmas there. While visiting other places, he met Acharya Sri 108 Sanmati Sagar Ji Maharaj in Kuravali in the year 1929, who conferred him with the title of Upadhyaya in Kishan Garh on 25/09/1992 and he became Upadhyaya Chandra Sagar. Henceforth, he stayed along with Acharya Shri and witnessed the Chaturmas of the year 1993 in Kapren. 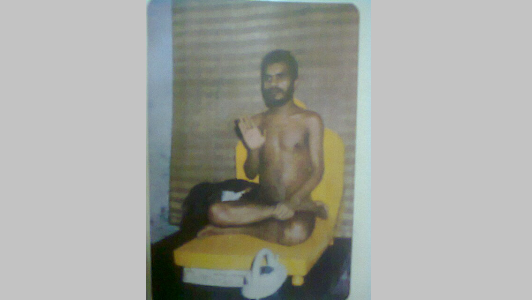