Aryika Shri 105 Mahayashmati Mataji was born on 3rd January 1989. She was very active and strong during her childhood.

Her name before initiation was Siddha Jain. Her name was suggested by her Grandfather Tilok Chand Ji who later took initiation and became Muni Shri Charitra Sagar Ji.

Siddha  won many gold medals & silver medals in judo karate during her school life. Unlike other kids who have hobbies of collecting Autographs from movie stars/actors she was having a hobby to collect Ashirvad/Blessings  from Digambar Jain Acharya and Muni. At the age of 22 years Siddha took initiation to become mataji who was renamed after initiation as "Mahayashmati Mataji".

At the age of 8 she acted in a fancy dress competition as a Aryika Mataji. She had also acted a Brahmi Kumari & Asta kumari in Panchkalyan puja during various acts.

During her school times Siddha took part and won  many competitions in the school.  She won Gold Medal in Judo Karate at the State level , Silver Meedal at National Level, and was  awarded Black Belt  in Karate . She also used to teach karate in School College. However she had a keen interest to write blessings in the diary from Acharya, Muni, Aryika & Mataji

When she were 4 her grandfather took initiation from Acharya Shri 108 Vardhaman Sagar Ji Maharaj,  in Sri Shravan Belgola,

After grandfather’s initiation, Acharya Shri Vardhaman Sagar ji wrote in "Blessings" that according to the tradition, proceed on the path of religion and renunciation ... Going to the temple with grandfather from a young age, going to school in the temple at night, was interested in childhood. Mataji had never consumed potato & onions

When you were only 13 years old, then in the hometown Sanavad, she got an opportunity to see the samadhi of Muni Shri Charitra Sagar Ji from close quarters.

Acharya Sangh included: On the day of Vijayadashami in the year 2011 on Shri Sammed Shikharji

On the day of Akshaya Tritiya in the year 2012 from Acharya Shri 108 Vardhaman Sagar Ji at  Papaura Ji (M.P.) she took wow of lifelong celibacy.

6th initiation of the Pancholia family.

There are total 6 initations done at Pancholiya family whose details are as follows.

On the very Initiation day everyone was looking at the beauty of her eyes, which were filled with accomplishment of choosing the true destiny.  The entire world witnessed these golden moments through television.  Acharya Shri 108 Vardhaman Sagar Ji Maharaj gave a grand Jaineshwari initiation in Sri Kshetra Shravana belagola and proceeded her on Vairagya path and pronounced a new name "Mahayashmatimataji"...

Link to Printed Article in Jainachar 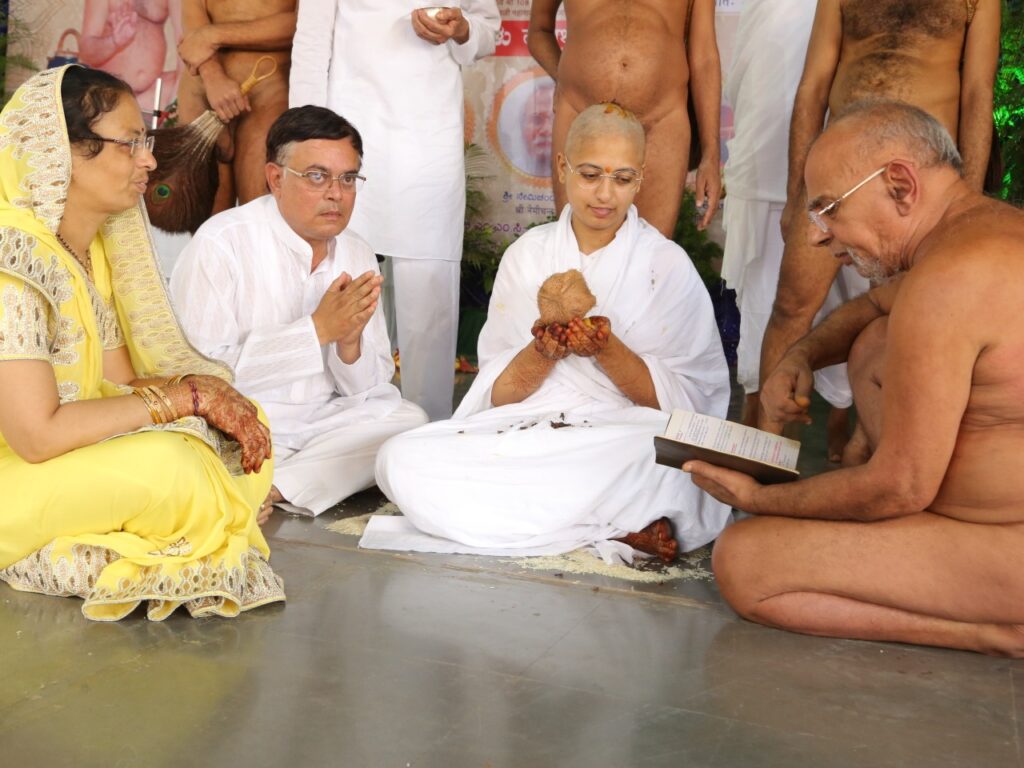 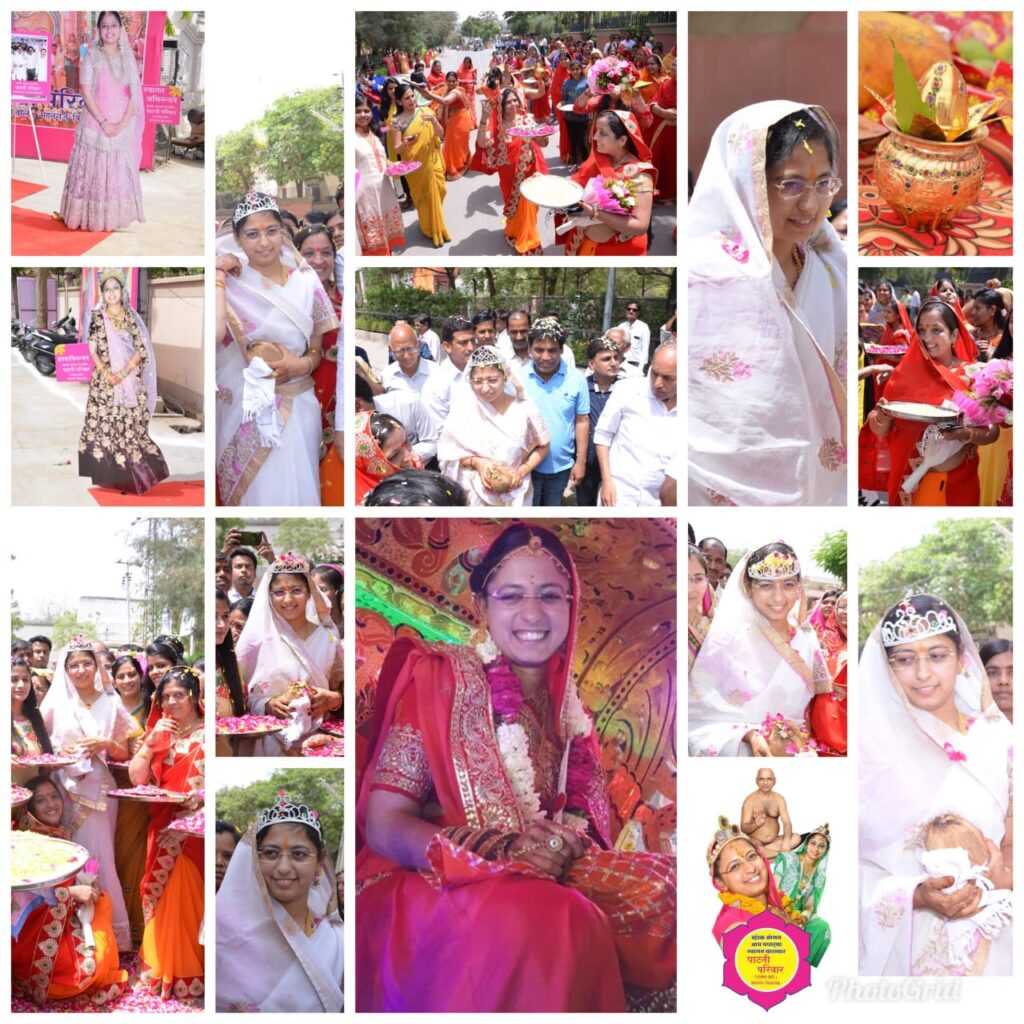 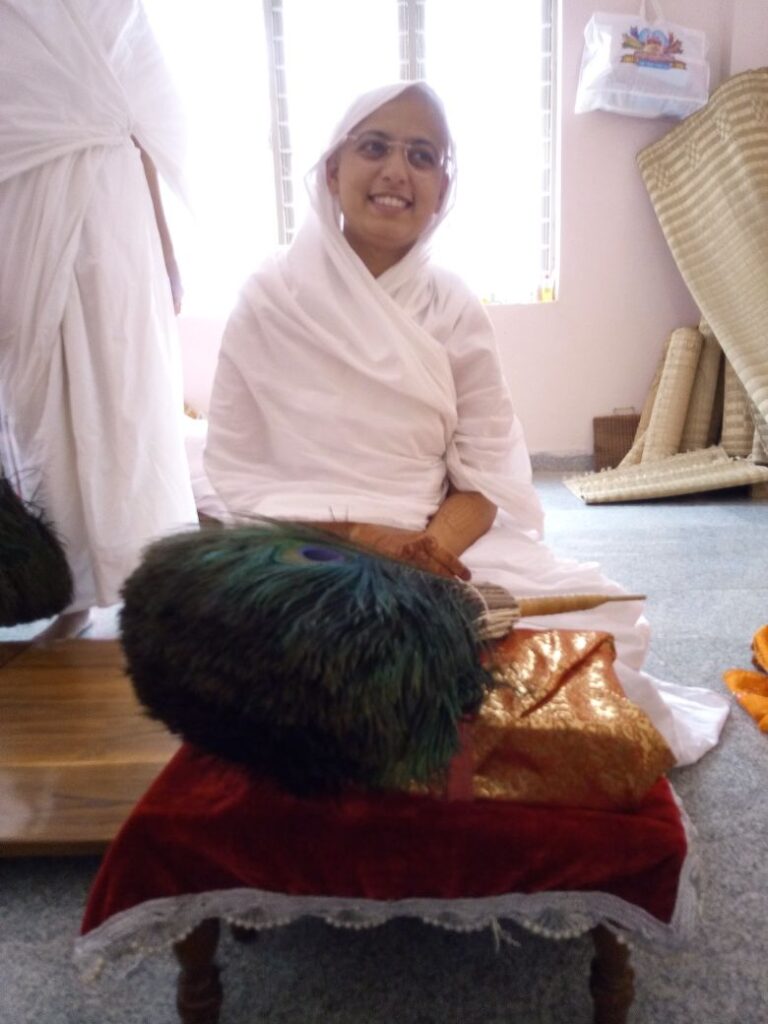