Muni 108 Shri Aryanandi Maharaj ,a supreme being, a man of meditation , dedication and devotion a hermit of commitment and compassion , a Muni who lived a dedicated life like the sacred river Ganga ,pargeting purifying and promoting all the lives coming in the way he himself was an incarnation of charity and piety. A divine combination of mercy ,pity ,peace and love was experienced in his personality by a large number of people in India . Shri Aryanandiji was a great sage, a savior of several souls. He who dedicated his entire life for the service of mankind lighted the path of several sinful persons stumbling in the darkness of ignorance.

Muni Shri Aryanandi was born in a small village Dhorkin in Paithan Taluka of Aurangabad district on 28th February ,1907. He was named as Shankar , by his loving parents Laxmanrao and Krishnabai Ahmindra ,a religious couple. He took academic education up to upper primary school . in addition to that he learnt Sanskrit and through the Sanskrit bhasha vishaya and custom Examination brilliantly. He also studied Marathi, Hindi and Urdu literature. At the age of 20, he got married to Parvatidevi a daughter of Dadaji Sonatakke Babarao. Though he worked at different posts like custom inspector sr Clerk, deputy custom officer, treasurer and officer, he was completely free from competition. In his youth he made up his mind to live a simple, selfless and pious life. He not only looked after his own family members but also all other people whom he met on his way of life. He worked as a tax inspector in Nizam rule for 30 years, there was a terrible corruption all around him but he remained completely free from any type of corruption in his life because he was having deep faith in religion and he had a commitment with society .Whilst at walsa in 1929, he convinced the villagers to stop the evil custom of killing a goat as a offering Naiveddya to the Devi-mata in the village temple. Whilst at Aurangabad he came in contact with Manikchandji Pahade, Kachardasji Bakaliwal, Kishenseth, Deepchandji Thole, Kastur Sauji, Gopal Sawaji Mahindrakar, Mahadurao Gosavi etc. With help of those rich people from the Jain community Muni Shri Aryanandi started a Digamber Jain School and bhau (muni Shri Aryanandi ) himself rendered his free services as a teacher in the pathshala.

Whilst Acharya Veersagar Maharaj was living in Shantinath Mandir, bhau used to attend all his preachings and sermons Acharya Veersagarji's chaturmas was there in Aurangabad. Bhau went there and engaged himself in religious programs. Though Bhau lived a married life, he was completely unselfish and was free from all kind of attachments with materialistic things. He wanted to be very close to the God and wanted to live a detached life. He was always in search of saint and sages. He was earnestly desiring to live a simple pious, selfless, life and wanted to be a sage himself. Somebody informed him that Acharya Shantisagar Maharaj has come to Kunthalgiri. He went to that sacred land. With his mother's permission he went to Gometashwar. After returning from there he went to Acharya Shantisagar Maharaj and requested him to give his permission to live a bachelor's life (Bramhchari) there after Aacharya Shantisagar Maharaj gave him pledge signifying life. He asked Bhau and his wife to live together like friends and not like husband and wife. They should engage themselves in chanting, meditation and concentration on religious matters. Aacharya Shantisagar Maharaj blessed Bhau and renamed him as 'Dnayansagar'. In this way Bhau went a step ahead towards Muni Marg a way to become Jain muni. After adopting Bramachari vrata , Dhyansagarji's first chaturmas at Karakamb (District Solapur). He build a sabhamandap for this temple at Karkamb. He raised funds and bought 32 acres of land for Nawagad Sansthan(Parbhani) in Marathwada. He also renovated the Jain temple at Paithan. Dnyansagarji was earnestly willing to become a Jain muni. He had earlier promised Acharya Samantha-bhadra maharaj that he would become a muni after his wife had been nominated for his pension. As soon as his wife was nominated for pension he set out for Kunthalgiri on 5th November 1959 .
On Friday 13th November 1959 Dnyansagar became Muni Shri Aryanandi under the guidance and advice of Gurudev Muni 108 Samanthabhadra at Kunthalgiri. After that he devoted his complete life on meditation and on reading and writing religious books. Not only this but he traveled all over India covering a distance of 32,000 kilometer on bare foot for teaching and preaching the Jain Principles to the people of India .

After becoming muni Shri Aryanandi, he became completely detached from worldly life and devoted his life only for religious works. He rendered a great services to the Jain community in India, till the apparent end of his life in 2000 A.D. The most important services rendered by him and the most eminent work done by him can be briefly stated as follows:- Right from 1959 he had started his chaturmas, the first took place at Kunthalgiri, After that he observed Chaturmas every year at different places. In addition to the 25 chaturmas observed by muni Shri Aryanandi Maharaj, following are the most important works done by him.
1) He formed Gurukul in Parshwanath Digambar Jain Bramhacharyashram, Ellora on 5th of June 1962.
2) He then began to raise funds for the protection and development of Jain pilgrimages in India. He was successful in raising funds of one crore rupees in 1980.
3) By muni Shri Aryanandi's inspiration a lake was built at Kunthalgiri in 1985. - lift Irrigation Scheme at Kunthalgiri.
4) In 1986 muni started Bhojandan Scheme for 250 Jain students at Ellora.
Gurudev Samantabharda Maharaj passed away on 18th August 1988, muni Shri Aryanandi was extremely sad but he accepted it as the decision of the nature and paid homage to his Guru in the presence of a number of shravaks. Muni stayed at Ellora for Chaturmas and soon after the chaturmas he set out on his pilgrimage. By the year 1989 muni covered a distance of 30,000 kilometers. At Ellora muni met a German youth Herman Coon and his girl friend Angelica. They were highly impressed by muni's knowledge and simplicity. Considering muni as their father, both of them got married in his presence and sought blessings. Muni taught them Tatwarth Sutra in Hindi and English. Herman Coon translated Tatwarth Sutra in German language. At muni's chaturmas at Satana, Herman came to meet muni with wife and friend Hans-burgh. All were highly impressed by muni's thoughts and philosophies. They became his devoted disciples.

Muni attended Sarva Dharma Sammelan. Jagadguru Shankarcharya represented Hindu religion and muni delivered a speech on Jain faith. At the age of 85 muni was advised by the doctors not to travel ;yet he set out on foot for Girnar Yatra on 17th December 1990. In his way he visited Pawan Siddhakshetra "Pawagad" and reached Girnar on 27th February 1991.On his way back he visited many holly places, at every place he preached good virtues to people.He then reached to Boriwali,Mumbai. He visited number of places in Mumbai.
After a long journey on foot, muni reached at Aatishayakshetra Nawagad(Parbhani ).He founded a school for Jain children in 1990. He also raised a large fund for the renovation of the temples at Pancha Kalyanak Pratishta at Buldhana. Formation of Shravikashram at pawagad,Pancha Kalyanak at Chopda Kund and a very prolong Pad yatra of more than 35000 kilometers even in his ninties are some of the notable services rendered by muni Shri Aryanandi after 1990.

Muni freed a number of people from bad habits and evil deeds; raised many schools and institutions for the welfare of the Jain community and rendered a great service to humanity.
After Sallekhana muni left this world and became one with the God. He himself was one of the greatest messenger of God on the earth. In addition to the great social services muni wrote more than 18 religious books for the welfare of human community. He passed away on 8th February 2000 at Navagad(Parbhani). He is still there with us all in the form of his great teachings and great services to humanity. 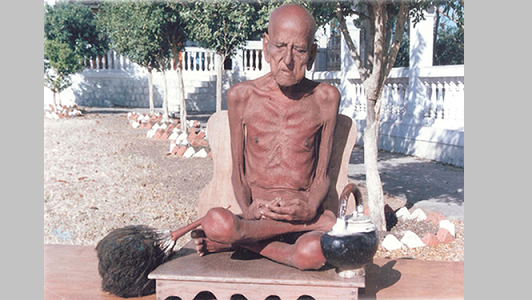