A Vibhuti Param Pujya Gurudev Acharya Yogendra Sagar ji was born in a Brahmin family. In the married life of Pt. Fowdal Prasad Sharma and Smt. Damayanti Bai Sharma, the boy Ramesh was born on February 17, 1961.

A Vibhuti Param Pujya Gurudev Acharya Yogendra Sagar ji was born in a Brahmin family. In the married life of Pt. Fowdal Prasad Sharma and Smt. Damayanti Bai Sharma, the boy Ramesh was born on February 14, 1961. Child Ramesh was just 45 days old. Vatsalya Ratnakar Param Pujya Acharya Shri Vimal Sagar ji's Mars blessing was attained during his childhood. The child Ramesh's mind seemed to be less in the school of writing. Hearing the story of Satya Narayana being held in the Gali locality, the child Ramesh at the age of 6-7 They became good storytellers, which was heard by a congregation of 25-50 children. The story of Sathya Narayana brought a silent revolution in Ramesh's life. Aroused curiosity in the mind, aroused thirst, put a question in the mind that who is the true Narayana God? How to find them, in solitude, Ramesh He used to have thoughts of richness, poverty, life and death. Ramesh, a child full of the good rites of the Brahmin family, was looking for an able and qualified teacher to come in contact with many saints, sages, sages and scholars from his early child life to calm his knowledge and knowledge. For peace of mind, the children wandered from Ramesh Dar - from the temple to the mosque, from the gurudwara to the church, to Mulla Molavi Selekar Pandit priest but nowhere did they get satisfaction. Gone. His search was completed. The deviation of the resolution option was over. The Guru's connoisseurs also identified the diamond in a vision. Both did not want to lose each other. The one who did not know how to see God properly, who did not know the Jain element, also remembered the Namokar Mantra properly. It was not, the sadhu who was not aware of the sage, he insisted on receiving initiation from the forehead at the feet of Acharya Shri Sanmati Sagar. Wanted to hold the posture. Ultimately, the wish of the disciple was fulfilled. Virag was conquered. On Sunday, February 25, 1979, at Bamorkalaan Shivpuri, Acharya Sanmati Sagar gave Ramesh a Jaineshwari initiation. And he was named Muni Sri 108 Rishabh Sagar. Sanmati Sagar ji decked you with Balacharya post in Kota on February 26, 1949, by decking your compassion compassion and love for everyone, from the soil of the earth to the best of humans. And you became Balacharya Yogendra Sagar. After initiation, you studied Jnadarshan. Shastra, Puranas and deep elements. You considered Swadhyayas as Prana Vayu. With your initiation, you proved that Jainism is not of any particular community. Apart from Jainism, it is a religion that can be practiced by people of other castes as well. This religion can be practiced with humans even till the three-day long. It was done. As the Jyoti statue came out, it would start to rain and his consecration would happen. Your samadhi took place on 12-03-2014. 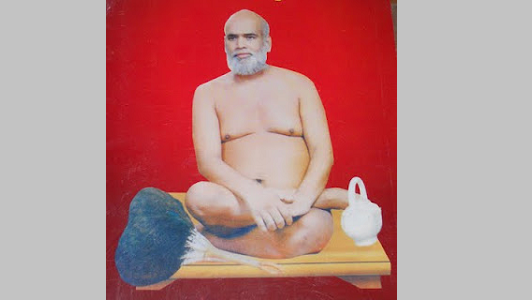 A Vibhuti Param Pujya Gurudev Acharya Yogendra Sagar ji was born in a Brahmin family. In the married life of Pt. Fowdal Prasad Sharma and Smt. Damayanti Bai Sharma, the boy Ramesh was born on February 17, 1961.