Charukirti Bhattarak Swamiji is the present pontiff of the world renowned Shravanabelagola Math. Born on 3rd May 1949 at Varang in Karnataka as Ratnavarma, H.H. Swamiji has not only studied Jain Philosophy in Prakrit, Sanskrit and Kannada but is also an M.A. in History (Mysore University) and an M.A.in Philosophy (Bangalore University).

His Holiness Jagadguru Karmayogi Charukeerthy Bhattarak Swamiji is the present pontiff of the world renowned Shravanabelagola Math. Born on 3rd May 1949 at Varang in Karnatak as Ratnavarma, H.H. Swamiji has not only studied Jain Philosophy in Prakrit, Sanskrit and Kannada but is also an M.A. in History (Mysore University) and an M.A.in Philosophy (Bangalore University).

H.H.Swamiji became a Monk on 12th December, 1969 and ascended the Dharmacharya Peetha at Shravanabelagola Math on 19th April, 1970. He moved on to become the Chairman of S.D.J.M.I. Managing Committee (The Managing Committee of Shravanabelagola Shrine). The title ‘Charukeerthy Swamiji’ was conferred upon Acharya Muni Shubhachandra during the reign of the Hoysala Dynasty, by the king, for his able guidance during a turbulent period. Since then the succeeding Acharyas have continued to take over the title.

As the Pontiff of the Shravanabelagola Math, H.H. Swamiji not only toils hard to treasure the valuable heritage of the Math, but is in constant attempt to improve and enhance its worth. It is at Shravanabelagola, that Shrutakevali Bhadrababhu Muni and his disciple Emperor Chandragupta Maurya attained samadhi in the year 300 B.C.. The Dharmacharya Peetha was established then and Shravanabelagola has since been recognised as an important centre of learning Jain philosophy, religion and practice.

It is a well known fact that H.H. Swamiji is a dedicated task master. In appreciation of his dedication to selfless service, he was honoured with the title 'Karmayogi' by the late Prime Minister Smt.Indira Gandhi. His active role in organising the highly successful holy journey of the 'Dharmachakra' across the length and breadth of Southern India in commemoration of the '2500th anniversary of Bhagwan Mahaveer's Nirvana', the very well organised '1000th year consecration and Head Anointing (Mahamastakabhisheka)' ceremonies of Bhagwan Bahubali and the Free Eye Camp organised at Shravanabelagola in which a 1000 people benefitted speak volume about Swamiji's acumen.

H.H. Swamiji is an enlightening torch in the field of education. He has established Pre-Primary, Primary and High Schools, a College of Pharmacy, P.U.C. College (Science), an Engineering College, a Polytechnic and a National Institute for Prakrit Studies and Research Centre. Gommateshwar Vidyapeetha is instrumental in producing scholars in religious studies. In order to make the treasure of knowledge in Prakrit available to the common man, Swamiji has established the 'Prakrit Jnanabharathi Education Trust' at Bangalore. Under the auspices of this trust, National Prakrit Conferences are held once in every two years. 'Prakrit Jnanabharathi Awards' are also presented every year, to ten scholars selected for their notable contribution in the field of Prakrit.

H.H. Swamiji is also deeply involved in various developmental Projects. Under his able guidance numerous Dharmashalas and Guest Houses providing all amenities to the large number of tourists and pilgrims have been constructed. An Ayurvedic Hospital, an Eye Hospital and a Clinical Lab are in service. A mobile hospital which was launched to benefit the rural areas is serving the purpose. In addition, the ten villages in the vicinity of Shravanabelagola which was taken up for development is now provided with school buildings, drinking water, new tanks, community centres, roads and street lights.

Being an academic, H.H.Swamiji is also an articulate orator. He has a strong command over Hindi, English and Kannada languages and his discourses are simple and lucid. Therefore its but inevitable that he is often invited by several social organisations like Vishwa Dharma Shanti Sammelan Samiti (World Religion & Peace Conference Committee), to deliver his spell bounding lectures. He has toured Singapore, U.S.A., Kenya, U.K. and Europe towards the same. He performed the consecration of the Jain Temple of Leicester, England in 1988.

Through his notable accomplishments H.H.Swamiji has simplified religion for the layman and opened several avenues where the preachings of the Tirthankars can be practiced. 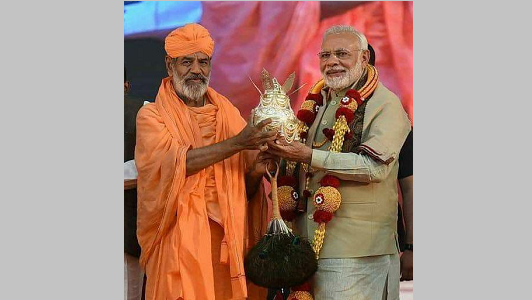 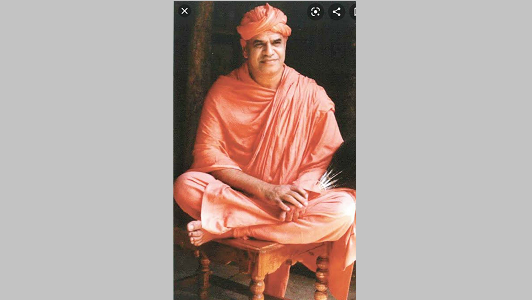 Charukirti Bhattarak Swamiji is the present pontiff of the world renowned Shravanabelagola Math. Born on 3rd May 1949 at Varang in Karnataka as Ratnavarma, H.H. Swamiji has not only studied Jain Philosophy in Prakrit, Sanskrit and Kannada but is also an M.A. in History (Mysore University) and an M.A.in Philosophy (Bangalore University).