The first great ascetic of this 20th century, 108 Shri Adisagarji Maharaj (Anklikar), who used to do penance and meditation in the forests. Your patta disciple Acharya 108 Shri MahavirKirtiji Maharaj, who was a great ascetic, samadhi emperor, charitra chudamani and a master of 18 languages, who ruled in the whole of India, having practiced the importance of religion. Your fame story is full of many miracles. The Supreme Priest is disciple of such Mahayogi, 108 Ganadhipati Ganadharacharya is Shri Kunthusagarji Maharaj Sahib. You took Muni initiation on Hamcha Siddha Sretra at the tender age of 18 years and attained Ganadhar post by your Guru at his Samadhi time. While serving in the whole of India, he gave centuries of initiation and wrote many scriptures, translated and rewritten the inaccessible rare texts and saved and propagated Jinwani. Challenging the secularists by flaunting them and hoisted the flag of Syedvad religion. The ancient Sri Aninda Parshwanath atiyyar area of ​​Mewar province in Rajasthan was renovated by such an era saint, construction of new courtyard and greater works are being done. You are the inspiration for the publication of the book Muni 108 Shri Dharmanandiji, a disciple of the great influential Ganadharacharya Shri Kunthusagarji Maharaj. 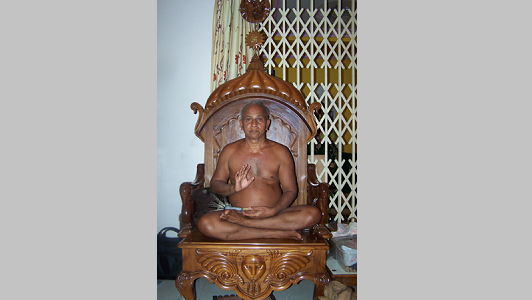