Acharya Ratna Shri 108 Bahubali Ji Maharaj was born on 14th December 1932 in Rukdi Kolhapur, Maharashtra. His father's name was Balwant Rao ji and mother's name was Akkatai. He took Brahmacharya Vrat in 1952 at the age of 20.

Acharya Ratna Sri 108 Bahubali Ji Maharaj was born on 14th December, 1932 in Rukdi, Kolhapur Maharashtra. His father's name was Balwant Rao ji and mother's name was Akkatai. He took Brahmacharya Vrat in 1952 at the age of 20. He did not get married. Acharya Deshbhushan Ji Maharaj gave him Muni Diksha in the year 1979 and he was renamed Muni Sri 108 Bahubali ji. On 28th June 1960, he was given the position of Acharya. He had knowledge of many languages and also visited Shikhar ji and Girnar ji four times.
With the inspiration, guidance and blessings of Acharya Ratna Shri 108 Bahubali Ji Maharaj, the faithful Bhakjano jointly created the "Acharya Bahubali Spiritual Research Trust" as well as the Shikohpur Siddhanta pilgrimage area on the Delhi-Jaipur highway and completed the foundation stone of Panchayat Balayati Tirthankar Jinmandir on April 15, 2002.

He was memorialized at the Chulgiri region near Jaipur on 10th May,2010. Acharya Bahubali Ji Maharaj in his sermon emphasized the need to educate general public for a progressive and ethical Indian society. Digambar Jains promoted free primary education to the children of their community. He was keen to spread education among the youth and he focused on building a society based on moral values.

Acharya Shri Bahubali Sagar Ji Maharaj, disciple of Acharya Shri Desh Bhushan Ji Maharaj belonging to Digambar Jain sect left for his heavenly abode with 'samadhimaran' on 10th May, 2010 at Khaniaji, Chulgiri Atishay Kshetra near Jaipur, on the way to Girnar Ji . His cremation was performed with Jain rites on the next day. He had accepted Muni diksha on 2nd February, 1975. A large number of devotees rushed to the place to have his last sight(darshan) and participate in the cremation procession. With his inspiration, a new pilgrimage center, named 'Siddharth Teerth' has been developed recently near Gurgaon-Delhi. Acharya Bahubali ji Maharaj in his sermons laid stress on the need to educate the masses for a progressive and ethical Indian society. The spiritual head of Digambar Jain community promoted free primary education to children and provided the same at various places. He was keen to spread education amongst the youth. He also focused on the creation of a society based on ethical values. According to him it is the task of all the religions to bring ethics into their homes. When they are followed at home by the family, it becomes easy for the younger population to apply them in the society as well. 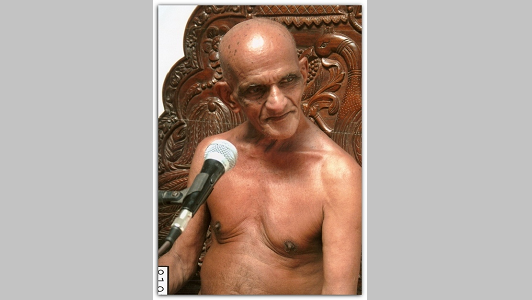 Acharya Ratna Shri 108 Bahubali Ji Maharaj was born on 14th December 1932 in Rukdi Kolhapur, Maharashtra. His father's name was Balwant Rao ji and mother's name was Akkatai. He took Brahmacharya Vrat in 1952 at the age of 20.